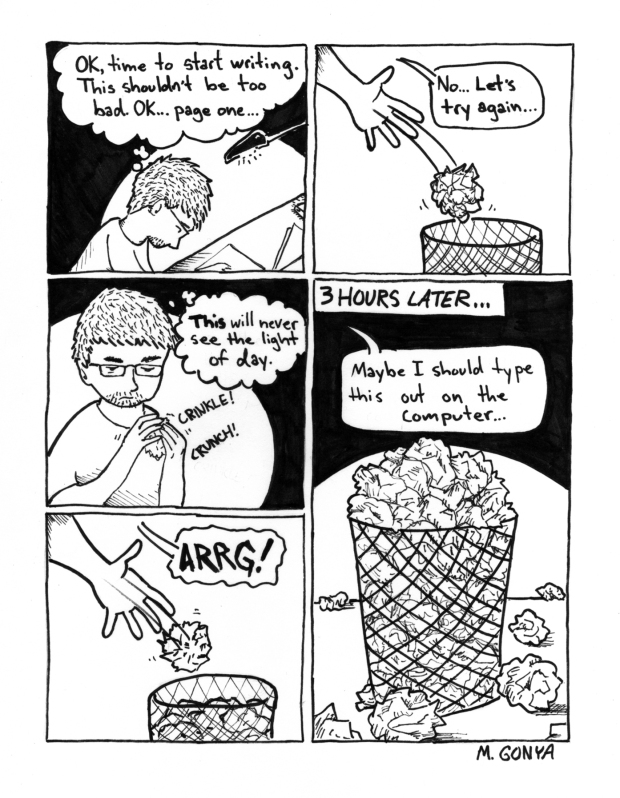 Hello everyone! It is now June and I have moved on to the next phase or step in the process of making this graphic novel. As you can see I have decided on the look of myself in the book and that was a major accomplishment for myself. I will still have to design the other characters in the book. I will save that for later when I’m ready to draw out the book. I just wanted to get a good feel for what my character design will look like now because that will be a good jumping off point for the look of the rest of the book.

As for the next phase of the book making process, I have given myself till September to accomplish my next goals. This step will be mostly writing a script. I have never really written anything more than 5 pages in my life so it’s a little scary. 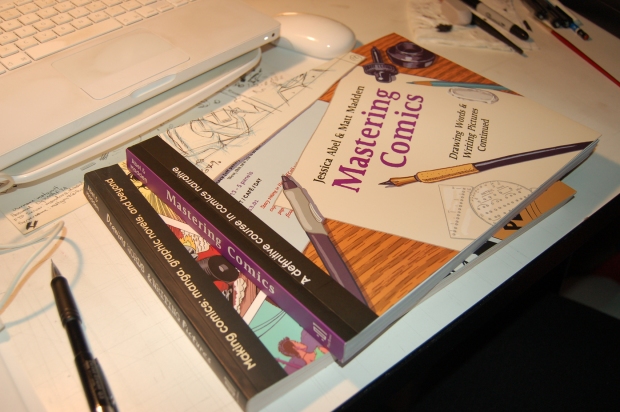 I bought “Mastering Comics” this past week because I’m hoping it will give me some good information about writing a script and the steps to take in the writing process. I enjoyed the first book, “Drawing Words & Writing Pictures.” Right now I’m in the story pitch stage when I have to sum up my story in a paragraph or so. At this point I don’t know how helpful this book will be but I’m hoping it will point me in the right direction.

The writing process will have several stages to it. As I said before, I will give myself till Sept. to write just a purely words script (mostly done on the computer). I will then do a rough page layout with just words inside the panels  to see what the page will look like and how many pages the story will need. From there I plan on adding or subtracting from the story or moving scenes around. Then I plan on penciling in story in earnest. After the whole book is penciled in I will of course start to ink it. After about a third of the book is inked, I will start sending out what I have to publishers to see if they are interested. So that it my plan of attack so far.

I have bad news that affects this project. A couple of days ago I discovered my scanner (a HP Photosmart Premium all-in-one) now likes to put a thick striped line down the center of the scanned image. So instead of using a big chunk of my budgeted money for a new scanner, I have decided to use the scanner at my work until I figure out what I’m going to do. I like feeling like I’m using the system for my own good but I also really just like the convenience of using my own scanner at home.

So from now until September I will be writing the book which I will not go into too much detail here. I don’t want to give away too much story. I will give updates on how the writing process is going and maybe little discoveries I’ve made along the way. I will continue to do the one page comics that you see above just to practice drawing. They may not always be about me or the book though. I was think of maybe doing illustrated “top ten lists” and posting those on this blog and maybe sprinkling them throughout the book as well.

I will also begin to collect photo references during this next phase. I especially need to start taking pictures of the local area. This I will do while writing the script.

That is where I am at in a nutshell. I didn’t plan to write so much but I guess I had more to say than I thought. Stop in again to see what I’m up to. Thanks for dropping by! 🙂

What I write about